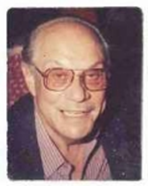 Born in Bronx, New York and raised in Vineland, New Jersey, Mr. Rosen was a respected leader in disabilities field. After serving in the Marine Corps during World War II, he earned bachelor and master’s degree at Glassboro State (now Rowan University) in special education.

Over the course of his more than 40-year professional career, he held several positions, most notably as Director of Education at Vineland State School, Associate Director of the state developmental disabilities service agency in Michigan, and as an advisor to Eunice Kennedy Shriver in organizing the Special Olympics.

A Fellow of AAIDD, Mr. Rosen also served on the Vineland Developmental Center’s Board of Trustees and as President of the National Association of Superintendents of Public Residential Facilities for the Mentally Retarded. He was the recipient of many awards and recognitions, including the 1979 AAIDD Leadership Award.

After his retirement, Mr. Rosen devoted his energies to wood carving.  He served on the board of the South Jersey Wood Carver’s Association, and his art was regularly on display.